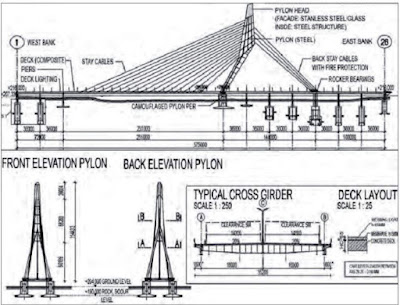 Total length of cable stayed bridge from expansion joint to expansion joint is 575 meters, with main cable- stayed span of 251 meters supported with 15 sets of cables on one side and counterbalanced by 8 back stay cables attached at a rocker bearing on axis 23.
The bridge's steel and concrete composite deck has dual carriageway of 4 lanes, 14 m each, with about 1.2 m central verge, space for anchoring cables, maintenance walkway and crash barrier on either side of the central verge. The outer to outer width of bridge is around 35.20 m and the approach span are about 36 m long. Spherical bearings are provided on all the piers. Pendulum bearing are provided for back stay.

The Steel Pylon of around 154 meters from top of the bearings consists of two legs made up of steel boxes, which merge into one upper pylon body zone made up of a load bearing skin stiffened by internal stiffeners and bracing s, where the cable supporting the main span and the back stays are anchored. Each of the pylon legs consists of a hollow steel box, which would be roughly 50 - 80 meter high. The upper end is the kink diaphragm, which is the transition from pylon leg to the pylon body. 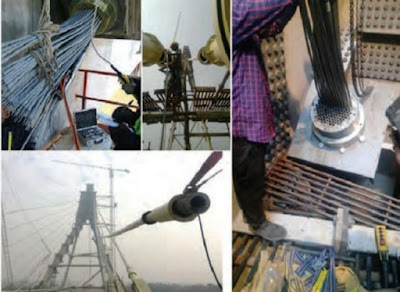 It also has a pylon head, made up of beams and columns in steel structure with a glass cladding. Major part of the steel for pylon is of grade S355. In very highly stressed anchorage zones, S460 grade steel is also used. Each leg of pylon rests on spherical bearings to transmit vertical loads of around 17,000 T.
The deck spans 32 m in transverse direction for B lanes of traffic,4 lanes in each direction. The composite deck consists of two main girders (I- shaped) in longitudinal direction and cross girders at 4.5 m spacing along the deck. Spans are of 13.5 m long on the cable- supported part, 36 m on the approach  spans, which are supported over concrete columns. Most part of the deck slab is made up of full depth prefabricated concrete elements of varying thickness from 250 to 350 mm, stitched in- situ over steel girder flanges. In highly stressed areas, near pylon base and backstay anchorage, in-situ concrete up to 700 mm thick is used.
The cables are made up of bundles of parallel 15.7 mm strands of class 1.770 MPa, protected against corrosion with hot dip galvanization & outer PE- pipes. Depending on the location the number of strands per cable varies from 55 to 123 nos. at the main span and is 127 nos. for each backstay.
Under the axis A and C, independent foundations are provided up to the depth of 20 m below ground level as generally rocky stratum was geotechnically determined at that level. 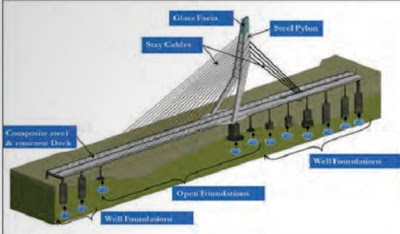 There are 6 numbers of open foundation resting on rocky strata at a depth of about 20m.
As the open foundation were to be rested on rock by about 20 m below the ground level, sheet - piled cofferdam was used for excavation by Elevated Lateral Support System (ELS).
All well foundation were required to be done adopting jack down method of sinking for controlling the sinking operation without tilt and shift.
By bharti - April 10, 2019 3 comments:

Bogibeel bridge is a combined road and rail bridge over the Brahmaputra river in the north eastern Indian state of Assam between Dhemaji district and Dibrugarh district, which was started in the year 2002 and took a total of 200 months to complete, heavy rainfall in the region being the main cause for the slow progress. Bogibeel river bridge is the longest rail-cum-road bridge in India measuring 4.94 kilometres over the Brahmaputra river. As it is situated in an earthquake-prone area it is India's first bridge to have fully welded steel-concrete support beams that can withstand earthquakes of magnitudes up to 7 on the Richter Scale.

This is also Asia’s 2nd longest rail-cum-road bridge and has a serviceable period of around 120 years. This is the 5th longest bridge in India after Bhupen Hazarika Setu, Dibang River Bridge, Mahatma Gandhi Setu and Bandra-Worli Sea Link. The bridge was constructed by a consortium of construction companies headed by Hindustan Construction Company. It was inaugurated by prime minister Narendra Modi on 25th December 2018 on the occasion of Good Governance Day.

The Bogibeel bridge traces its origins to the Assam Accord of 1985 and was one of several major infrastructural projects to be set up in Assam in accordance with the pact. It was sanctioned by the Government of India in 1997-98 and was expected to be completed by the end of the Ninth Five Year Plan. The foundation of the bridge was laid in January 1997 by Prime Minister H.D.Deva Gowda, but its construction was inaugurated only in 2002 by Prime Minister, A.B. Vajpayee. The project was to be completed in six years following the inauguration, however the work did not begin until 2007, owing to lack of funds and attention. Consequently, that same year, the Bogibeel bridge was granted a national project status by the Government of India in 2007 by Prime Minister Manmohan Singh, but the implementation was slow, notwithstanding a Congress government in Assam. The Union Ministry of Finance funded 75% of the project costs while the Ministry of Railways financed the rest. The actual work on the project only began in 2011.

The design of Bogibeel bridge has 39 spans of 125 m and a superstructure of composite welded steel truss and reinforced concrete. It is designed to carry a double line 1,676 mm (5 ft 6 in) broad gauge railway on the lower deck and a 2-lane road on the upper deck. With its proximity to the China border, the bridge also has tremendous significance for India's defence and has been built strong enough to support the movement of tanks and even fighter jet landings. It is the longest combined rail and road bridge in India and second longest bridge in Assam over the river Brahmaputra after Bhupen Hazarika Setu which is a road bridge of length 9.15 km.