Shimla district it is bounded by two major thrusts :

There are other thrusts presents in region, such as the Jwalamukhi thrusts and the Drang thrust. 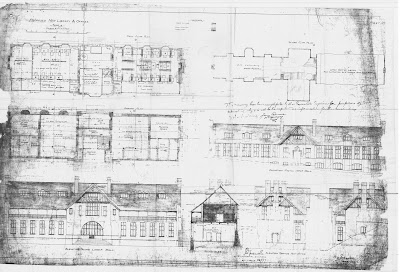 Townhall Project was constructed during 1st decade of 20th century and it was a steel frame structure. At that time, steel frame technology was latest technology of that time. This building has withstand all the earthquakes till date, so it should be retrofit for next millenniums.

Dynamic cone penetration test (Dcpt) were conducted at 6 locations in January, 2014. Out of which 3 location were adjacent to Town hall on Ridge road.
Allowable bearing capacity arrived from test was (qa) Net=13 t/ m2 and (qa) Gross = 15.6/m2.

The foundations are deemed sufficient for their intended purpose of use.


Internal Doors and Windows :
Original Woodwork and joinery which is believed to be dated from the time of the original construction are in good condition. The timber is sound with little to no presence of rot or infestation. Substantial checking of paintwork has occurred exposing large areas of wood. These conditions are due to the over painting of the old oil based paints with newer water based paints. The window panes are all intact with isolated broken panes. The majority of the panes are well fixed and rattle free.

Outer Windows:  Most of windows panes facing Mall road and Ridge have been damaged due to rain and other Climatic conditions. Most of these require Replacement/ Restoration.

Recommendation for Refurbishment of Town hall: