New York City’s obsession with building ultra-tall, skinny skyscrapers should come as a surprise to no one. For decades, architects and developers have worked to “out-phallic” each other to seize prestige and obscene amounts of cash. New York-based Oiio Studio has had enough of the taller-is-better trend – and they’re now aiming to create the “longest skyscraper in the world” – aptly dubbed “The Big Bend” – to draw attention to the city’s absurd real estate situation. The proposed Big Bend aims to be the longest skyscraper on the globe – topping out even Dubai’s Burj Khalifa – by folding
the tower in half in an inverted U-shape. 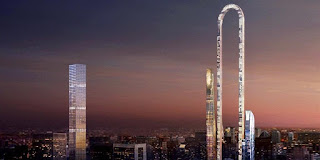 Big Bend is a 4,000-foot-tall paperclip-shaped skyscraper that would loom over the towers along New York City’s Billionaire’s Row. The plans evoke an ultra-modern atmosphere with images of top-hatted rich men taking center stage in the renderings. According to the architects, the “bendy” design responds to the city’s uber-tall skyscrapers, which have been criticized for “bending” building codes and using their height to command exorbitant prices.
By bharti - April 05, 2017